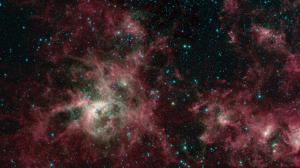 Deification (or theosis) is the process by which a mortal soul is made into a child of God. That’s something I’ve discussed more when talking about Eriugena’s homily The Voice of the Eagle.

Right now I’m going to talk about how that same process plays out on the universal scale. I believe that the purpose of creation is deification. The whole of everything is working Its way towards God.

God is the source of our being and the final resting place of our being. The Alpha and the Omega. In God we live and move and have our being. Therefore, our destiny is always to return to God. Eriugena, talks about this in the Periphyseon when he says:

When iron is melted in fire and becomes liquid, no trace of its nature becomes visible to the senses, but it seems wholly converted into the nature of fire. Only by the reason is it known to preserve its own nature of iron.

Therefore just as melted iron appears wholly as fire even though its substance remains; so a sound intellect must realise that after the end of this world every nature will seem to be God alone; so that God, who cannot be apprehended in Himself, is apprehended in a certain way through creation, while creation itself, in an ineffable miracle, is transformed into God.

Many people will refer to this line of thinking as either pantheism or panentheism. Pantheism is the idea that God is the universe, they are exactly the same thing. Panentheism, on other hand, is the belief that the universe is made of God but that God is much more than the sum of the universe.

Whichever way you look at it, it is in Christ that we are created and thus it is to Christ we will always return, for our nature is Christ. Just as the melted iron has the same nature no matter what form it takes, so are we Christ even in this human form. This is what Paul is talking about in Colossians when he says:

The Son is the image of the invisible God, the firstborn over all creation. For in him all things were created: things in heaven and on earth, visible and invisible, whether thrones or powers or rulers or authorities; all things have been created through him and for him. He is before all things, and in him all things hold together.

In Romans 8 Paul talks about how the deification of individual people (those who have been transformed are here called children of God) will be the beginning of the deification of all creation. This is the purpose God created the universe for and the futility and imperfections of the created world were put in place by God to help it grow into freedom. Paul also emphasizes that the material world itself will be redeemed. This process is not a liberation of a spiritual being from a fleshy prison, it is actually the perfection of real material existence.

Creation waits with eager longing for the revealing of the children of God; for the creation was subjected to futility, not of its own will but by the will of the one who subjected it, in hope that the creation itself will be set free from its bondage to decay and will obtain the freedom of the glory of the children of God. We know that the whole creation has been groaning in labor pains until now; and not only the creation, but we ourselves, who have the first fruits of the Spirit, groan inwardly while we wait for adoption, the redemption of our bodies.

The message here is not one where we get to leave the Earth behind to ascend into Heaven. It is one where Heaven is brought down to Earth. Or more accurately one in which the whole of creation will grow into what God has always intended it to be.

If you’re interested in this topic, we talk about it more in our Virtual Retreat. We also discuss what role contemplation has in the deification of the finite being and of all reality, if you’d like to learn more.

If you enjoyed this article, please share it on your favourite social media or sign up for our email list to receive weekly reflections. If you want to learn more about Celtic Christianity and Contemplation, check out some of the free videos from our virtual retreat: Sacred Spaces: Contemplation and the Celtic Spirit.

2 thoughts on “The Deification of All Creation”